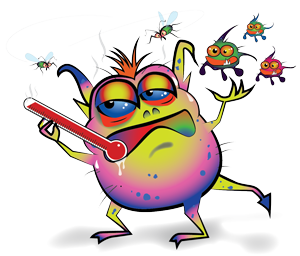 He’s Mal the Maleficent, the perennial purveyor of disease, the one among the Six Data Loss Gremlins who enjoys mischief for the sheer pleasure of harming others. A trickster and a thief, Mal is unrelenting in his attempts to steal or destroy data. He employs all manner of deceitful practices to spread infection and gets his cues from the vilest of life forms – the virus. Now using tactful social engineering schemes, like conning unwitting users into spreading his disease, Mal is the reigning king of malware infection.

Mal attaches himself to a target hoping it will infect others, making them unintentional accomplices in his dastardly endeavors. Each year, Mal costs businesses hundreds of billions of dollars in stolen trade secrets and personal user data. Sometimes he does it for profit, employing ransom tactics, blackmail and outright thievery, and sometimes simply for the evil gratification of tearing down what others build. Mal is clever, but he can be outwitted. To learn more about how, call us at 785-813-1054 or email us at [email protected]. Together, we can halt Mal’s contagion.